Coaching from the from Strength Legend Paul Anderson

From time immemorial massively strong biceps have been sought after by countless warriors and lifting enthusiasts. Perhaps a large part of the popularity of this part of the upper arm is that, for the average man, the biceps are considerably more difficult to increase in size than its larger and usually less often used neighbor, the triceps.

For most, the biceps have relatively low D.Q. (Development Quotient) and with its previously mentioned status as muscular royalty, an endless variety of exercises and special equipment have been invented and employed in an effort to stretch the tape 1/8 of an inch more.

Without further ado, here are 10 Old School Iron tips to grow your arms!

Paul Anderson recommends that all arm work, whether pulling or curling, should be preceded by at least one set of upside-down pulls or curls. He argues that this is the fastest and most thorough way to get blood to the target area. He was also a big fan of handstand pushups to help build his massive Bench Press.

I incorporate this concept with my clients by utilizing loaded stretching.

Bob Hoffman and John Grimek were some of the first Legends of The Iron Game to argue that over pumping is counterproductive for muscular development. Anderson very much agreed with this. Sporting arms over 24 inches in Diameter; when Paul Anderson speaks, I listen.

In curling movements with a supinated grip, begin the curl with a wrist curl so that the hand precedes the wrist as the bar goes up. This little trick builds development of size and strength in the forearm flexors. When training for higher repetitions and lighter weights I have my clients perform as many of the prescribed reps as possible with their wrists extended, and then move to wrist flexion to help grind out a few extra reps.

When performing pulling movements, fully extend your arms on each repetition because of the effect on the biceps’ insertion. Fully lengthening the biceps ensures healthy elbow joints and increases blood flow to the muscle.

Avoid staleness by changing to new biceps exercises whenever progress ceases or your arms begin to ache deep in the elbow joint, forearms or wrists. Even in his day, Anderson recommended to check your diet and your sleep schedule, because your progress could very well be retarded by a problem in either, or both, of these areas.

In your curling movements, both regular (supinated) and reverse (pronated) grip, use an E-Z curl type bar at least part of the time as it imparts a slightly different development pattern. The E-Z curl bar can provide relief from aches and pains in the lower arm.

In both pulling and curling movements avoid abrupt jerky movements with the barbell and/or dumbbell. Greats like Paul Anderson knew choppy, incomplete reps posed a danger to all or part of the bicep’s insertion or even the body of the biceps muscle.

Use maximum weights for at least some of your exercises. Vary your program by occasionally working “beyond fatigue.” Incorporate forced reps if you have a training partner. If you train alone, try adding unilateral eccentric accentuated reps to your arm exercises by helping with the non-lifting arm.

Vary your repetitions anywhere from 1 to 30, depending on your mood, condition, and goal. The pump is the crucial factor. The way I individualize programs for my clients eliminates the guesswork from this aspect of training. Some folks get bigger pumps from heavier weights and others need more repetition.

There you have it! 10 Tips from the legend Paul Anderson! Incorporate these principles into your training and enjoy the gains!

One of the biggest mistakes you can make during your health & fitness journey is not tracking your workout progress. Progress can be… 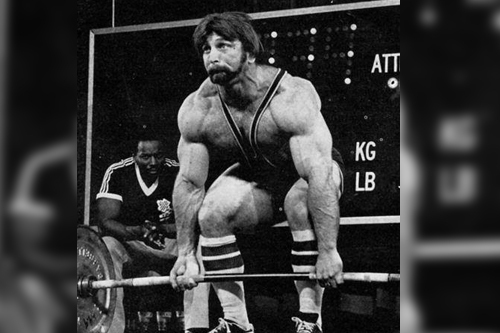 Roger Estep is a name that most are unfamiliar with, however this image of Estep has probably been seen by anyone that has…

ANTHONY DITILLO Anthony Ditillo is a name unfamiliar to many, but quite legendary to a select few.  Ditillo was a prominent writer for…

If you weigh 200 pounds and squat/deadlift 200 pounds, you aren’t as strong as you think you are. Likewise, if you weigh 400…

In a previous blog post, “6 supplements to boost your health.” We talked about supplement recommendations for everyday life that will help improve…